This post is part 2 of the "type systems" series:

In a previous blog post, I explained what static typing is, and presented a small example in Scala. We saw that static typing enables to spot some errors before executing the program. This is one of the reasons why Scala and Java are used in production for data pipelines. As Python is often used by data scientists to process data, early catching obviously (through type checking) erroneous code is beneficial for an industrialization of it, without rewriting it into another language.

Luckily, Python also has optional static typing since version 3.5. It enables types checking before execution with tools such as mypy, but also other powerfull features for IDEs as we will see in this blog post.

PEP 582 gives an overview for type hints before it was adopted by Python. The next section provides more references to type hints in Python, and presents some examples of the syntax.

PEP 483 introduced a discussion on type hints for Python. This PEP has the type "informational", meaning (see PEP 1) that it does not propose a new feature that should be implemented.

It is thus an introduction to PEP 484 which is in the "standards track", meaning it describes a new feature. The status is "provisional", i.e. the proposal has been accepted for inclusion in the reference implementation.

PEP 484 introduced both the typing module and a syntax for type annotations for function signatures.

Here is an instance of function annotation:

Here, we defined the Vector type as an alias for the type List[float].

PEP 484 also introduced a syntax for variable annotations with comments:

PEP 526 introduced another syntax for variable annotations without relying on comments to express the type of variables. For instance, PEP 526 allows the following syntax:

We created a row implemented by a dictionary where the keys are the column labels. We then print the maximum value of the row and its corresponding column.

We can check the types with mypy:

It outputs nothing, meaning that nothing went wrong with the type checking.

If we run mypy on this example (example2.py), it outputs:

It warns about mistakes, without running the code: for instance, the annotation for the argmax function is incompatible with the type of the row variable given as argument.

If you change the function signature by (or define a type Row as seen previously with the type Vector):

and run mypy again, it outputs:

If you run the above code, with the modification or without it, it fails and outputs the same error:

It outputs the same error because Python does not check the type annotations.

We saw how to use mypy to static check the code, but type annotations enable more powerfull features for IDEs.

Enable the powers of an IDE

If you use a good Python editor such as PyCharm, it can help you with the autocomplete feature by filtering and proposing only the methods available for the type. 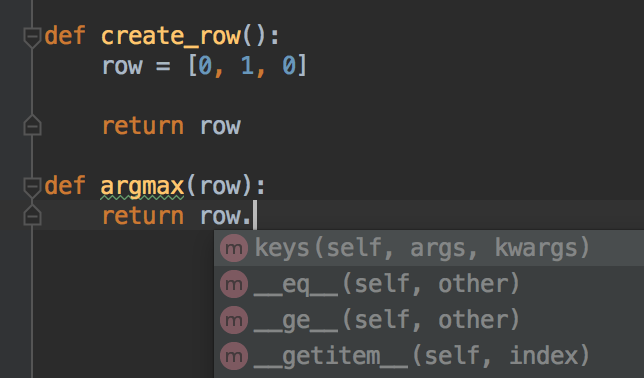 Since Pycham has no information about the type of the row argument in the argmax function, the autocomple dropdown menu cannot propose valuable autocompletion.

If however we specify the type of the argument as a list of int, Pycharm can filter the elements of the dropdown menu, and propose only methods applicable to a list:

If we change the type, it changes the proposed completions accordingly:

In fact, if we don't type annotate the function, in some cases, Pycharm is smart enough to show a valuable autocomplete. This is the case if the variable is created with create_row and passed to argmax:

Type annotations often help the IDE when it cannot infer the type.

We saw how to use type annotations in Python, by:

Type annotations are also used by data classes (PEP 557) as we will see in another blog post.

We saw what is called a nominative typed system, i.e. comparisons are based on the names of the types or explicit declarations. There exists a proposition (PEP 544) for a structural type system, i.e. based on properties: types are considered compatible if they share the same features. It allows to avoid the inheritance of some generic classes or the support of some protocols (iterator for instance), instead the classes can be implicitly considered as a subtype of another class. It can thus be considered as static duck typing. Mypy documentation on structural subtyping provides additional explainations.